“But inside… is a prince. Trapped inside the Beast. So I drew the eyes.… 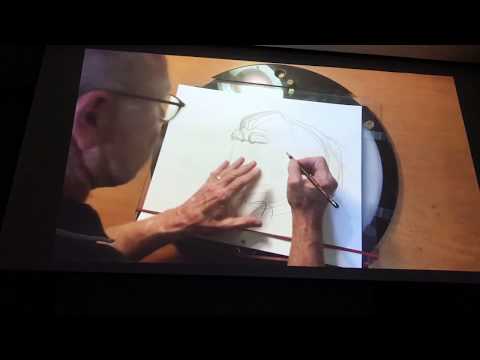 “But inside… is a prince. Trapped inside the Beast. So I drew the eyes. And the eyes are the window to the soul. And as I drew these eyes, I looked at him and thought, “That’s him.” I turned to my assistant, I said, “That’s him, there he is. I recognize him. There’s something magic in creating something.”

Glen Keane on designing the Beast.

In an auditorium of kids as young as 9, you could hear a pin drop when he got to this part. Enjoy! Full transcription below.
– Cooper

“As an animator, I’m really an actor with a pencil. It could be with a computer too, but I prefer a pencil. There’s something wonderful about drawing. I feel like drawing is sort of a seismograph of your soul. It shows how you’re feeling inside.
And I have this strange belief about the characters I animate. I feel like they exist before I draw them, before I design them. I never would have believed that, except that’s been my experience. There’s a moment when I’m drawing a character that they actually come to life. And you recognize them: ‘That’s him.’ ‘That’s Pocahontas,’ or ‘That’s Ariel’.
In the case of the Beast, let me show you. I’d been working for quite a while on what the design for the Beast might look like, for “Beauty and the Beast”. And I liked the heaviness of a buffalo. There was a buffalo head that I had on my wall as inspiration for the Beast. And there was kind of a sadness to the buffalo head. Maybe because he was on my wall. (laughter)
But then there’s this crest of a gorilla’s head, and then the brow of a gorilla. And I thought, “The beast has got to be a combination of animals.” My assistant had come in and said, “So what’s the Beast gonna look like?” And I was explaining this to him. I said “I don’t know what he’s gonna look like!” But I’d drawn the buffalo head and the gorilla crest. And I said, “I kind of like this wild boar nose, with these tusks.” And the beard of a buffalo, too. But the mane of a lion – I had photos of lions around. And as I’m drawing, I’m just describing all of this. The horns were kind of a combination of a variety of different horns, twisting and curving shapes like this.
Then I started thinking, “Wait a minute. Belle is never gonna fall in love with this guy. Who’s gonna believe that anyone could fall in love with something so ugly! I’ll give him cow ears, that’ll make him a little friendlier.” (laughter)
But inside… is a prince. Trapped inside the Beast. So I drew the eyes. And the eyes are the window to the soul. And as I drew these eyes, I looked at him and thought, “That’s him.” I turned to my assistant, I said, “That’s him, there he is. I recognize him.”
There’s something magic in creating something. There’s something that we’re not even in control of. And that’s part of the fun of life, is stepping out boldly, not knowing where you’re going to land, but believing that somehow, it will all come together. Just like it did with the Beast.”