Steve Wolfhard is a cartoon writer and storyboard artist who’s been nominated for an Emmy award for his work on Adventure Time. Since joining AT in season 3, Steve has contributed his zany humor and style to several more great shows, including Over the Garden Wall and our own latest season of Bravest Warriors. Steve lends great insight here into his path through animation and sources of inspiration. To hear that he often pulls ideas from dreams gives helpful context to the nightmarish ‘Lemongrab eats Lemongrab’ scene that he wrote, below. Going on the record as saying that this is and has been one of my very favorite minutes in animation. Enjoy!

When did you know you wanted to work in animation?

I always wanted to be a cartoonist as long as I can remember. I went to animation school because I just wanted to get better at cartoons. Once I got in there, I started to really enjoy animation.

When you were in the Classical Animation program at Sheridan, did you already know you wanted to be a writer/storyboard artist?

No. Until I learned about how Adventure Time did their work, as a board-driven show, I didn’t even know that writing was an option that might be available for me, or that storyboarding could be something that I could love.

What’s a general outline of your path through animation, from first job on? How did opportunities come about?

When I graduated from animation school, there weren’t many jobs available, so I started on a public access animation show with some friends of mine in a small town in Ontario. After that I started working at Studio B in Vancouver doing character design and flash animation. Then I planned on quitting animation for good. I did illustration and comics for a couple of years. I met Pen Ward at a comic convention, and he was collecting comics people to work on Adventure Time. That was my first job writing and storyboarding.

What have you written that you’re most proud of?

I’m really proud of a scene from an Adventure Time episode called “Another Five More Short Graybles”. The outline just said something like “the Lemongrabs get angry.” I made that into a scene where one of the Lemongrabs ate the other one. It still makes me laugh.

What is your writing routine like? Any must-haves for writing?

I get ideas in dreams a lot. The idea for the Bravest Warriors episode “I.O.U. for Your Love” came from a dream. I like coming up with a setpiece or a fun ending and working around that. I also like to come up with fun jokes and get a lot of those in there. If I’m in a block, I think about what I’m trying to say with this story. In general, though, I don’t trust anything that I come up with. I always talk with my wife Leslie about it and trust her to know if something’s good or bad or how something can be fixed.

What do you like best about being a writer / storyboard artist? What’s most challenging about it?

Writing and boarding are an artistically fulfilling part of animation. A job’s a job, and I know that the important thing is keeping the lights on and food on the table, but I feel really lucky that I get to tell stories. I can get kind of exhausted from having to come up with ideas all the time, but I’m very lucky.

What are your favorite things about Beth, Danny, Wallow and Chris? Do you have a favorite character?

I like that the four main characters are very sweet but also have sex drives. Haha. I think that a lot of adult-centered cartoons would have sex-focused characters, but it would be lecherous. In BW, characters can be lustful but they don’t lose any of their sweetness because of it. My favorite is Wallow. He’s the most sensitive, and I like his voice actor, Ian Jones-Quartey.

What do you like best about Bravest Warriors overall?

I like how much adventure can be packed into one episode. I see that going back to the roots of the show on YouTube, where each episode would start in media res and end before the actual story ended. Wall to wall action. And I appreciate how the space setting lets you bring in literally any kind of creative idea. What’s to stop you? It’s space. Who knows what’s out there.

How would you describe your writing style or voice in a few words?

I’m joke-focused, but I also like things to be very quiet and plain. In the most entertaining possible way.

What are your favorite cartoons? Which artists or writers do you admire most?

Right now, I’m really enjoying Craig of the Creek. As an adult, the things that have affected me the most have been the pilot for Adventure Time, some of the later episodes of Bee & Puppycat, and the first time I saw OK KO.
My favorite cartoonists are KC Green, Meredith Gran, Emily Carroll, Kate Beaton, and Pen Ward. And they are wonderful writers as well. You can’t really separate out cartooning and writing.
I also read a lot of science fiction. My favorite sci-fi authors are Ray Bradbury, Brandon Sanderson, Vernor Vinge, Ursula Le Guin, and Adrian Tchaikovsky.

Which 5 books / comics / movies / seasons of TV would you have on a desert island – that has a functional entertainment center?

Books would be The Princess Bride (William Goldman), The Wizard of Earthsea series (Ursula K. Le Guin), the Zones of Thought series (Vernor Vinge), Something Wicked this Way Comes (Ray Bradbury), The Stars My Destination (Alfred Bester).
Comics: Vampire Loves (Joann Sfar), Dungeon (Lewis Trondheim, Joann Sfar), Dungeon Meshi (Ryoko Kui), Ranma ½ (Rumiko Takahashi), Madman (Mike Allred).
Movies: Porco Rosso (1992) Harvey (1950), The Adventures of Robin Hood (1938), Pinocchio (1940), A Room With a View (1985).
TV: Lost. It would be funny to have it on a desert island, but I don’t think I could bear to watch it again… let’s not count that one. Lost in Space (the original series), The Sopranos, Jeopardy!, and The Great British Bake-off. ❀

Thank you for the interview Steve! Everybody be sure to watch Summer Camp Island on Cartoon Network, the latest show Steve is writing/boarding on 🙂 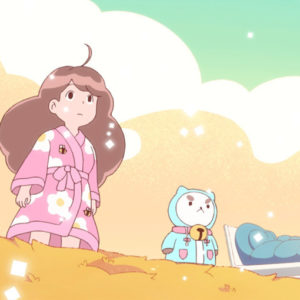 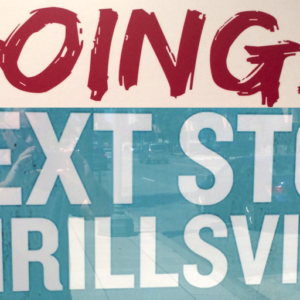 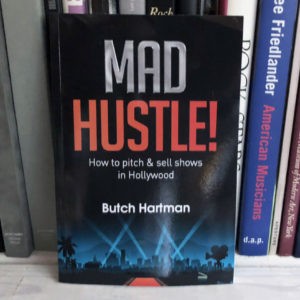